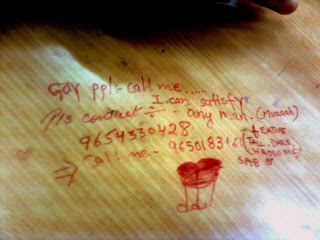 Every Person has a talent. An inherent talent. Some are good at making up stories, some are like masters in being caught at wrong situations. Some get the guys/girls they like. Many get guys/girls who like them.

Here I am talking about girl(s) who get guys like ‘they just want a girl’. Now this post is no sexist rant or so. just a general observation of certain experiences of what many call eve teasing or morning teasing or just roadside harassing.

So what triggers of such desperation is not rocket science. The mystery is that some girls have this knack for always attracting attention from this these sorta people. Not that they fall into the stupid cliche arguments of ‘plunging necklines or short skirts or exposure’ crap. What are there characteristics, how does it work…

No idea.. Just that out of the series of such instances. I thought lets analyse two.

At Delhi University it was around 7/8pm. Outside the station in search for an auto.

A chasmish (bespectacled) guy. all skins and bones (ASAB)

ASAB- Hello
GP- aaain!
ASAB- Madame can I talk?
GP- ehh (to her self, like no way you are goonga) (fastens her steps)
ASAB- Can we be friendship?
GP- Are you from orkut?
ASAB- haiin?
GP- ohh meant no no noway.. (almost runs into a rickshaw. and thus just hops in)

Just FYI- you don’t make/ create/ do or ‘be’ a friendship. (I sound such a geek)

GP reading Who will cry when you will die? (sequel to the book The Monk who sold the Ferrari)
in the metro. Don’t ask me “Why?” because, I am clueless. May be this triggered off the attention.. possible… 🙂

HR constantly stares at her, sneaks glances every now and then, while she continues to read,eyes buried deep into the book. The moment she gets off

She realized that a tall dark, not-so-handsome guy, had followed her out and was too eager to have a word with her.

GP rushed out. Took the stairs instead of escalators. (stay fit)

HR- (a fake funny accent) “Ma’am, I wanted to talk to you in the metro.
GP- ehh (confused look) (to her self) Not again
HR- But, I thought I will be insulted if you will say No in the metro.
GP- (now almost outside the station) And you won’t feel insulted if I say it now?
HR- (haiin, yeh toh mein ne socha hi nahi expression) No, no I mean don’t say No.
GP- It’s a NO. and I mean a no.
HR- With such a pretty face you will be having many boyfriends.
GP- like will you please get lost. (Pehli baat toh hai nahi, hai toh Tere ghar se kya jata hai expression)
HR- As you are so pretty. Please, don’t u mind a friend in the Navy?
GP- (saves a giggle) I definitely mind it. I am not interested.
HR- But ma’am atleast talk to me.
GP- “No. Thank you” (now with a stern face and almost running) Stop following me.
GP was now a good distance away but could still hear the guy talking. Suddenly she stopped.

Because, after all attempts of pleasing GP ‘literally’, HR called out,

“Ok forget about friendship will you mind a ‘Human Relationship’?

A gush of fresh air, made her silky stresses flow on her face. Her duppatta eager to fly and see the world. Her mind a bit strained.

She almost controlled her urge to say, “Yes, lets go for a coffee and you explain me what sort of new relationship this actually is?”

(All the characters and stories have taken place in reality. They are not creation of my stupid brain. But yes, the exaggeration wherever noticed is the need of the plot. Don’t try this at home they are performed by experts)

PS- I have not reached a conclusion on why certain people/ girls in this case, have this knack for attracting faltu attention or whatever way you term it. samajh toh gaye na. toh ab batao why why why?