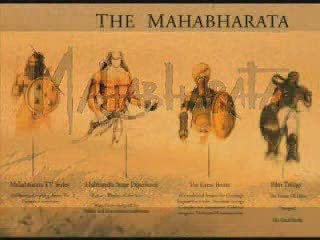 Once upon a time, Doordarshan telecasted a short tele series named ‘Vedvyas ke Pothey’ [Pothey: is plural for Pothi, the document which accounts for information regarding your forefathers. It is rather a religious document with the Pandas (Priests) at teerth sthals like Haridwar]
The teleseries was a great mix of light hearted moments and the small town innocence. It was placed in the times of BR Chopra’s Mahabharat. The story revolved around a family headed by a widow (I think she was..apologies for a bad memory), her sons and daughter in laws, and how they go to Haridwar where they find out that they are descendants of Ved Vyas — author of the great epic Mahabharata.
The craze of Mahabharat had gripped India then and the information was quite a bit of revelation. The camera captures the enthusiasm and innocence of people who wait regularly for the grand epic to start on the television screen. Everyone in the mauhalla (locality) flocks to have glimpse of Shri Krishna and Draupadi. Having a TV was considered fortunate as u could have a look at your dieties and see them talking too.

In the neighbourhood one of the families were fighting a case in the court regarding some thing (Again sorry, for my memory fails me sometimes). The lawyer enlightens one of the sons regarding the concept of “royalty” (sorry for the Nth time again, as I do not remember what triggered it off).

The information comes as a boon for the financially-not-so-well family. They think of filing a case against B.R.Chopra on the evidence of the ‘Pothey’ and the word of the Panda.

They file a case saying B.R.Chopra should pay us royalty for using our forefather’s text and earning huge profits out of advertisements. The case becomes a huge hit and gets great media attention and now I again fail to remember if they win it or not. I guess they end it on a winning note.

As I fail to remember half the things, the question is what is the use of the post. I just want to make a point that by the very concept of the show we can conclude that — it was fresh, new and innovative. Though, it did not boast of any grand renowned star cast, but brilliant actors. Lastly, it was a low budget series. It was strongly based on its storyline, characters, plot and a simple manner of conveying.

Now lets come to the point, (aah finally!), the recent attack of the mythological clones on our television screens has left me disappointed. Both the series — Mahabharata and Ramayana lack that ‘charm’. Though, Ramayan has a new and fresh star cast. So, they have atleast, managed to keep the innocence of the show intact.

Our Tollywood Princess (Ofcourse Missss [K]-Ekta Kapur) has transformed the grand epic in another soap opera. This time it is old wine in a new bottle. Kahani Humare Mahabharat ki has the same goddess type bahus, this time in godess type roles. But, she dares to differ. The advertisements and promos were worthy of being applauded. The concept and handling of it is certainly done in a ‘new’ and fresh manner.

The sets are grand and remind you of Bhansali’s genius. The costumes — Manish Malhotra: lifted straight from the hollywood movie [300]. It seems like a mixture of Indian + Greek+ Roman mythological opera. I fail to understand this woman, who overloads her actors with ornaments and jewelery in her daily soaps, here, restricts herself to minimal use of jewelery and accessories.

You see OMs and PARVATIs together as Ganga and Hastinapur Naresh Shantanu. At first it becomes extremely difficult to watch the husband and wives of the never ending soap operas fit into the shoes of these figures. Shantanu in his bare chested look and metallic belts reminds you of Homer’s warrior rather than Indian hero.

Then Makrand Deshpande’s get up again fails to deliver the sheer simplicity of Ved Vyas. He seems part of a grand theatrical performance where his high pitched extravagance is a misfit. Remember Harish Bhimani with his brilliant voice overs as Samay. The effortless narrative does not come as a jarring note in the flow of the story. It was very well knitted and flawless.

Lastly, Anita aka. Anjali from Kavyaanjali, is our Draupadi clad in a blood red saree and heightened eye makeup plus her curly silky tresses. She comes from Cannes film festival or some award function flaunting a tattoed shoulder. The freshness seems to be a stint to attract the youngistan junta. But, I think the story of Mahabharata deserved a better handling and a broader perspective. Somethings do not need western finishing. I will rather stick to Ramayan’s earthern look than the grandeur which fails to impress.

It is not the way I would imagine an Indian mythological saga. The simplicity of manner is what makes a show interesting like the small tele series I mentioned in the starting. Almost all our serials including the reality talent hunts presently lack that simplicity. For instance, even Sa Re Ga Ma Pa used to be more interesting when the judges never fought or participants never fainted. I think Jassuben Jayanti lal … on NDTV Imagine does strike a chord somewhere. Hope to see new features and directors who keep it simple.