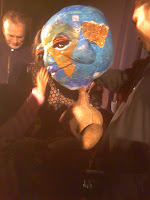 I just got back from Ishara International Puppet Festival at India Habitat Center. It was the last day of the festival and I was lucky enough to be a part of it. The two performances there tonight were- The flying flower and The little blue planet.

I was accompanied by my 3 year old niece who was immensely touched by the later. The little blue planet dwelled with the subject of climate change. It talked about the selfishness of modern man and struck a chord with the 150 odd people from all age groups. To play with the dark and light and at the same time maintain the simplicity of the act was commendable.

In the age of television, cinema and computers, Puppetry as an art form is dwindling. Its creative strength is not known to many. I experienced its imaginary powers today and am certainly moved beyond words. The children could associate with the pain of the little ‘Earthu’ when man messed with its beauty. Tears rolled down my little niece’s eyes. It was a delight to see the spark come back in the eyes of children when the little earthu was reconciled.

The need of the hour is to educate everyone through such innovative mediums. I have been struggling with this voyeurism of human nature – to witness and not act. I realised how difficult the art form was to portray such sensitive an issue. ‘Timing’ is not only important in comedy, but in puppetry it plays a very substantial role. To, click with the hearts of people with not a single dialogue or song, it is difficult. But, the right mix between puppetry, ballet and drama was extremely moving.

Anurupa Roy deserves all the credit to atleast take a step and frame an opionion in the budding minds. She sowed some brilliant seeds in the minds of tommorow. 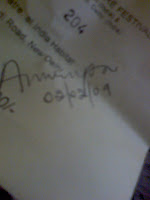 Thank you. Here is a small verse, celebrating what you have begun.

It had no clue
As, everything was new
A life,
That sustained many lives

Traversed the skies,
Flowers and butterflies
Then came the ‘Man’
Who made him stand?
Our very own- Earthu

Follies realised
Environment restored
Then came another change
But, this time for good

And regained its smile
The green, the red, the blue
The beauty beyond skies
Our very own Earthu

To know more about The blue planet and the art of puppetry log on to www.katkatha.org