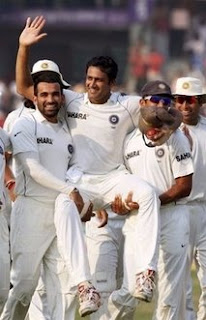 Anil Kumble, the warrior , the man with a never-say-die spirit bid adieu to the test cricket. What was surprising was the ‘timing’ of the act. We were all aware of Dada’s last innings. But, his announcement for me was a shock. I can’t imagine test cricket without him, the earliest memories i have of him is the ten wicket haul. I remember how everything at my place came to a stand still when he took ten wickets. My father had ordered everyone to stay wherever they were, mamu was supposed to be at the lunch table forever. And all the attending of nature’s call and other duties were to be done in the commercial breaks. we were as we used to say maintain the “vastu”.
Later when they showed how even the players on the field had their superstitions we all had a good laugh on our share of it. Cricket does unite us like crazy people. Such high passion for sports, as shown by Kumble, drives us even more than the usual. He has done it time and again. How can we forget his Brian Lara break through with a broken jaw. HE is one of the most sincere looking cricketers, initially with his Gandhi Ji specs, then their removal and later shaving of mustaches. Still the twinkle in his eyes shows how passionate and honest he is about the sport. The down to earth, never-into-a-scandal image stays and conquers my heart. I am overwhelmed and out of words on the exit of such a great cricketing legend. Even in his last match, he fought his way back with 11 stitches on his hand he took three wickets. Hats off to you warrior.
Your presence will be missed.