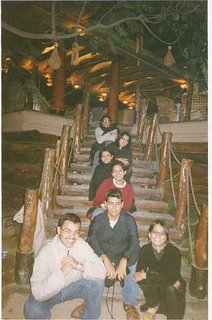 Delegations from Ramjas college, Miranda house and became a part of the LUMUN ’05 from 29th nov. to 3rd December last year. Getting a visa to is a tough nut to crack. For us it was no less difficult than asking J.K.Rowling for Dumbledore’s resurrection.

All thanks to Devika (student delegate, Miranda house) who managed to get us through. The bunch of high spirited students crossed the borders for the MUN and carried with them amazing reminisces. I am sure everybody will appreciate when it comes to the wide roads, the beautiful trucks, the cute small autos and of course the Non Veg. delicacies of . When it comes to food for me and some of my friends it was “motion out of order” and a completely starving journey. You do not find good as in ‘good’ vegetarian food in . Mind it ‘Chana-Chicken’ happens to be a veg dish out there. No doubt its for non vegetarians but a hell or rather it seems to lose existence in terms of Veg food. So, I came back as an Indian who values almost all kinds of vegetarian food phew!!!Anyway, we had mom’s puris and achaars to survive on.

The twenty four hour train journey was the longest and utterly exhausting. But the experience does leave you with a very royal feeling all together. The imperial treatment of BSF jawans on horse backs walking along with the train is all together exciting.

The arrangements at LUMS campus were not up to the level of an international meet but they were great keeping in mind it was All STUDENTS managed affair. PDC or the was the campus canteen and the place where we got our first set of instructions:

b) Do not leave the campus unaccompanied.

c) Please move in groups (due to obvious reasons).

It was freezing at night but the festive atmosphere around raised our spirits. The campus was fun and the students around were great too. Khoka, the PCO near the PDC was the only link of ours with . They were like us only and shared the same excitement of meeting people from their neighboring country. The place was interestingly full of cats and there were hardly any dogs to be seen. As we reached a day before the commencement of the conference our hosts took the time out to take us for shopping. ‘’, a not so economical but, a decent market was our first encounter with the city. Every now and then the only thought which cropped in our minds was “what is the difference?”

The market had a faint resemblance with Cannaught place, though the later happens to be much more developed. The Global Village was a awesome. Due to our big Visa hassle we could not manage to be a part of it but being a spectator was not at all a bad experience. The participants who were representing in the competition were heartened to meet the people themselves and vice versa. The opening ceremony was like any other formal event we attend. To begin with the student welcome address-the boring speeches from a minister-applause-thank you-goodbye. It was time to burn oil in the true sense. We were all busy writing our position papers for the morning session. It was hectic nonetheless extremely enjoyable conference. The first committee session was really scary. As, it was my first MUN I was quite nervous but things normalized by the time. There were series of formal events and informal ones too. Our day time was to be employed in committees so, our hosts decided that we were to enjoy ’s night life. So, we spent our days in committee sessions evenings in some sort of formal event and late evenings roaming about in markets Fortress or liberty and so on. We went and enjoyed hukkas and coffees at mini golf. Our sightseeing experiences were grand too visting Minar-e- , the Badshah-e-masjid and also seeing the Quran-e-sharif knitted in silver and golden threads. The ‘numaish’ or exhibition at Bundeshah was a mela where we bought n’number of socks. Pakistani Hashmi kajals are still the hot favourites and we got a full year’s stock. Anarkali market was the cheapest and the most crowded market I ever visited. It is in verisimilitude with our Chandni Chowk. It had beautiful shawls knitted with beads and chiken work Salwar Kameez. Not to forget the very famous food street. A dingy street with series of eateries on both sides of the road, glittering with lights and coulrful frills it was like a mela altogether. The food was great and we managed to find makki di roti and sarso ka saag over there. The last day was thus appetizing for everyone.

The most memorable event was on the last day of conference at the Peace and Prosperity session at . The session was discourse over issues amongst some Pakistani dignitaries Faisal Naqvi, Nelfor Mehndi, Zaheer Akram, Salman Taseer and Anshul from Mumbai. The event mirrored the real situation of heading nowhere. Dr.Mehndi felt that was the principal right of self determination for the kashmiris. On the contrary Mr. Akram thought it was overtaken by the notions of honour and pride for both the countries. The real issue has got lost in between and no body even bothers about the kashmiri people. Mr. Naqvi voiced the role of youth and also the primary concerns. He elucidated how we should not carry forward the burden of history to move ahead.

The debate surrounding the real definition of history was put to trial by Isha agarwal an Indian delegate to which he replied “I am not saying you to ignore it that would be unrealistic but we should acknowledge the challenges which it has put forth. We in have to move on from the legacy of 56 years. To take a stand, to be enlightened, educated and save our countries from anarchy. We have to make our a Banglore”. The hall was filled with acclaim and we felt there are likeminded people on both the sides. The event was a hot debate over the issue of , the role of youth in the peace progress. The imperatives of peace for both the countries were etched upon. Salman Taseer maintained “communication explosion is very important for our prosperity”.

The farewell night was a heart warming experience three of our delegates got special mentions though we did not manage any best delegate award. The event followed a dinner hosted by LUMS especially for us at ‘Cuckoos den’ the place was beautiful facing the monumental excellence of . We felt like heaven sitting on the terrace and enjoying the great food with the grrreat surroundings.

The antakshri at night were so full of hindi movie songs. HAD HELLUVA FUN in the game of truth and dare…. The ending to the game was done by singing national anthems of both the countries. We left with our heads held high in pride and self satisfaction. The clear hearts and great friendships last till now. Our long lasting friendships (especially with the girls of kinnaidd college ) and an international platform to showcase our talents are the treasures of the conference.