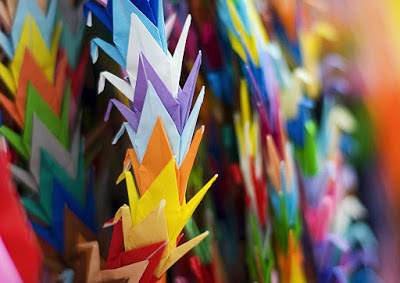 I thought the world needs this now, more than any other time. We need to create these vibrant paper cranes to let go of all the negativity around us. Perhaps, this way we will at least create some positive vibrations in our hearts and minds.

It is time to stand by each other irrespective of what nation we belong to. This Japanese tradition of folding cranes might be of no use, but it will be far more effective than changing display pictures and being armchair activists.

An eye for an eye only ends up making the whole world blind.Mahatma Gandhi

Hence, it is time to pray for peace and understand each other as human beings. Time and again one nation or the other are attacked by someone or the other. Powerful nations blame each other for the attacks and often end up attacking each other. As Mahatma Gandhi said, an eye for an eye will not lead us anywhere. But, sticking together and showing the world the power of peace, harmony and culture might just help us lead a blissful life.

Imagine all the people living life in peace. You may say I’m a dreamer, but I’m not the only one. I hope someday you’ll join us, and the world will be as one.John Lennon