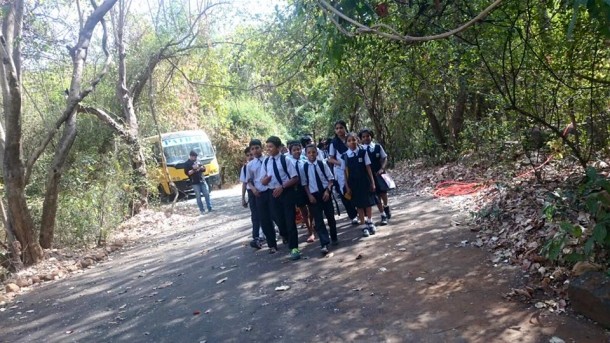 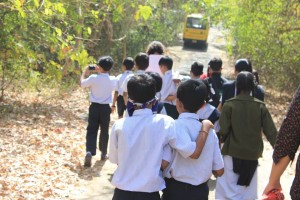 I am a student of Nehru Nagar Public School and this is the first time I am going to a forest on a #ShortcutSafaari. Yes, I have been told they are for real, but I am not sure.

“Didi, will we see Tiger?” I asked my teacher as we boarded the bus.

“What if you did, won’t you be scared?” she replied. I grinned and grabbed the window seat at the first opportunity. We were to go to BNHS, a nature reserve. We have been told, there will be other didis as well and we will be shown a movie.

I had woken up early today, earlier than most days. But, our bus driver uncle was very late. We took a bus to “film city” along with Divya ma’am. She is really nice. While we were all shouting poking fun at Ganesh, we saw something on the road. The bus stopped and we all froze. We saw a deer, in front of us on the road, like a car. 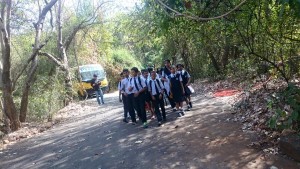 The moment the deer heard the bus horn he vanished into the greens. We all sat quietly after that and saw our bus halt at the destination. After listening to Divya’ ma am’s precautions, we formed a line and started to move. We were taken to a small auditorium, which looked similar to our school’s auditorium. But, it had a lot of animals and bird – tiger, deer, and even elephant. 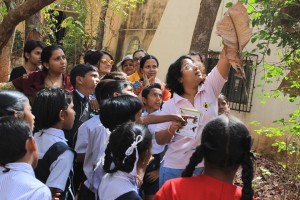 Ganesh as always asked a lot of questions. He had questions even for his own questions. But, then Isha miss from BNHS told us a lot of things about the forest. Believe me, she told us that there was a “leopard” in the same forest which we were about to visit. I had goosebumps, but I did not tell anyone. Because they all would laugh at me. Isha Ma’am told us how we were harming our own forests and what kind of trees we should plant.

There were a lot of people at BNHS and all of them seemed friendly.  We clicked a lot of selfies with the didis and also a bald uncle. We laughed a lot. I asked Isha miss if the forest she was talking about and the deer we saw were all for “real.” She smiled and said yes. Sita was sitting beside me and she kept saying that her village has a lot of forests and there are no forests in Mumbai. But, after listening to Isha ma’am, she was shocked.

Once we were divided into two groups, we all then began our #ShortchutSafaari, because we were late, we had to take a shortcut or a shorter version of safari. I kept wondering what the other group must have seen, what if they actually met the leopard.

We saw an elephant fossil, tiger butterfly, moths, birds, a weaver bird nest, yellow silk cotton flowers, red silk cotton and also trees with thorny trunks. We took a lot of pictures for our photography workshop over the weekends. It was a lot of fun, and could have been a lot of fun if it was not for Ganesh.He just does not stop, because of him, we were walking slower. There was so much to see and such little time. But, Ganesh won’t stop, not that his questions were wrong. To be honest, I also had same doubts, but not the courage to ask the questions. 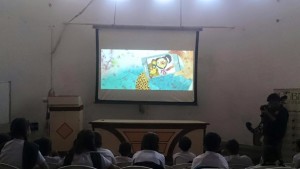 After our safaari, a didi gave us apples, I was starving because of so much walking. Then what happened was amazing. We saw a song which was not like any song I ever heard, it had no music, it had no language but still, I loved it. When were going back we were all humming that song from the movie “Shortcut Safaari”. The song showed leopard and a girl in friendship and how they were always together having fun. It was called “bako sufu.“

We went to Film City for an awesome lunch and loved every bit of the outing. We also met the director of the movie, who looked so humble and simple. We had photos clicked with him. On my way back I came to Divya ma’am and told her that “I was not scared of the tiger. If I saw him I will take a selfie with him. Just like they showed in the movie. Because Isha ma’am said, they do not harm us if we do not harm them.”

Divya ma’am patted my head and smiled. It was a wonderful day. Thank You Shorcut Safaari for such a fun picnic.

This is an imaginative account of a #Bloggersafaari organized by the team of an upcoming Bollywood movie for children called #ShortcutSafaari. It is narrated from the eyes of a kid who was also part of this experience.